Women’s World Cup Final Has GREAT Lessons for All

This Sunday at 2PM Eastern Time, I will be glued to my TV watching the US women play the ladies from Japan for the 2011 Women’s World Cup championship.

AND I HATE SOCCER!

So why will I sit and watch, riveted by EVERY play? As a career coach and business consultant…I SIMPLY HAVE TO! These women are showing what it takes for a top team and individuals to strive towards achieving greatness.

I ask you…has ANY other international sports competition brought together two more positive world role models for us to learn invaluable life lessons from than this game? It is truly RARE that a sporting event holds nearly universal appeal for teaching all the most important lessons on life, competition, teamwork, professionalism…YOU NAME IT!

On one hand is the lady’s team from Japan. 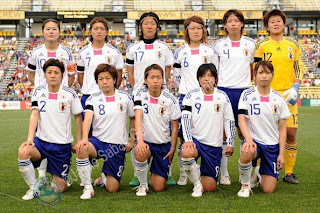 Hollywood could NOT have scripted a more improbable, against all odds David victory against Goliath win than when Japan beat a tournament favorite and host nation lady’s team from Germany. As a “reward” Japan got to face a VERY strong team from Sweden in the semi’s where the Japanese team was outsized 5′-4″ to 5′-8″ average per player by the Swedes…AND Japan STILL WON to continue the team’s phenomenal tournament play, in advancing to the finals.

The Japanese team plays for a nation still healing from a massive earthquake and the evacuation that followed due to the threat of multiple nuclear reactor meltdowns. The team has exhibited a “JUST WIN” mentality throughout the World Cup. They have taken on every adversary no matter how seemingly over-matched and has come through victorious in their path towards achieving greatness by winning a title.

And then there are those crazy American ladies… 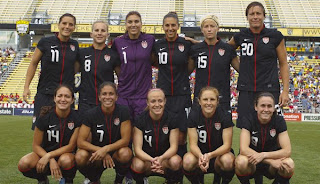 Favored to play in the finals before the tournament even began, they were a collection of stars that had won everything in their path as they racked up international wins. But clearly they likely had not faced adversity and may not have had to play as a truly unified team as when they faced the team from Brazil.

They ran into a Brazilian team that was up to the challenge of playing David to Team USA’s Goliath themselves. Brazil outplayed the US in the first half. Coupled with truly horrendous, heinous anti-American officiating the USA ladies faced a horrible position of having to play one player short a majority of the game.

As spectators we got to watch a team of stars rise to the occasion on a global stage.

Team USA put aside any egos and individual goals through clarity of focus on ONE goal…winning a championship! They pushed ahead and seized every opportunity and broke through against Brazil then they followed that win with a victory against France, for a date in the finals.

There are so many parallels for these two teams and so much that they represent that is best in sports. And can be in all of us. Can you see NFL and NBA players/teams performing like this (or the MLB and NHL, for that matter?)

Players on both sides elevated their games, put aside their personal needs, changed positions (roles), had the widespread support of their Nations behind them, all while exhibiting the highest levels of sportsmanship/professionalism as they pursued their lifelong passions.

On the American side, there was great coaching (management) by Sundhage, players becoming leaders (Wambach), rising stars who achieved success when called on to step up (Morgan and Cheney), and unbelievable saves from a woman named Hope Solo (how IRONIC!)

BOTH teams represent the highest standards of excellence regardless of the outcome.

Tune in to ESPN on Sunday at 2PM ET. For all those invaluable LIFE & CAREER lessons.