Quick, what do they have in common?

You know “THAT” one relative in your family that everyone is afraid to have at family functions? The ones who others think are swimming in dementia or a bit “off. The people who are not afraid to speak their minds even if it means saying those highly embarrassing things others don’t want to hear, no matter how truthful and indisputable the facts.

When a 4-year old tells you you’re fat you don’t have big bones, or are carrying around pregnancy weight for 20 years…you’re JUST fat!

Like the crazy uncle in the family that has had a “few too many” at a party and divulges deeply guarded secrets to complete strangers, they say the politically insensitive, factually true things that most other people are too embarrassed to admit.

As we commemorate 9/11…now more than ever our country could truly benefit from that same straight talk, damn the consequences discourse if we REALLY going to turn around this great American train wreck.

For 40 years we’ve allowed our captains of industry and Wall Street tycoons to amass huge fortunes, at the expense of the American middle class. Decades of lack of thought leadership have led to a higher education system that most Americans can’t afford, and does a horrible job of preparing graduates for success. Our two-party political system see-saws back and forth between a constant power struggle with both parties incapable of working together for the greater good of our citizenry.
America has been in a 20-year “Holy War” between the Judeo-Christian path aligned on one side and Islam on the other.

Thoughtful, sensitive dialog has given way to vitriol and close-minded hatred. The recent furor over burning Korans and establishing a mosque at Ground Zero are flash points that have exposed this deep wound that has not healed.

Small businesses (500 or fewer employees) have historically created 95% of all new jobs in America. In these economic times, our government is doing nothing to help small business owners grow. We have allowed our banks, insurance, and financial institutions to rob us blind. Our large corporations have outsourced and off-shored nearly all of our American industrial competitive advantage. We cannot create enough jobs to support our society even as family life savings are being worn away.

This is a call for all those “crazy Uncle Joe Biden” types who are not afraid to ruffle feathers by sparking frank and candid discussions about the course we have been on since after World War II, and the way for America to regain its “MOJO.”

Where are those great public works projects. Why not return to glory days past when this Nation built things? What about that dashing Yankee spirit driving home new innovation and forging a path towards new industries? 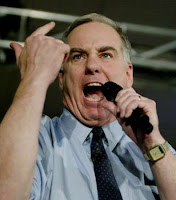 Where are the Ralph Naders, Craig Venters, Howard Deans, and H. Ross Perots when we need a leaders who exhibit creative thinking to challenge our conventional thinking more than ever before?

What IS crazy? Following the same failed behaviors that have gotten us into this mess i nthe first place.